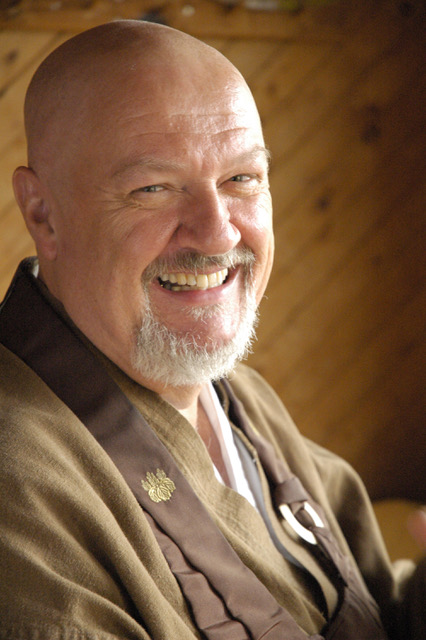 Zenkai Taiun M Elliston, Roshi began his engagement with Zen in 1966, when he met Rev. Soyu Matsuoka-roshi, founder and head teacher of the Chicago Zen Buddhist Temple (CZBT).  He contacted Zen through Rev. Soyu Matsuoka-roshi in the mid-sixties, becoming his disciple in short order, and later founded the Atlanta Soto Zen Center(ASZC) in the 1970s, of which he is the current Abbot, and which is one of the largest and most active centers for lay practitioners of Zen in the United States today.

After two years of training under Matsuoka-roshi’s supervision, and at his suggestion, he underwent a combined Initiation and Discipleship ceremony, and was given the dharma name Taiun, meaning “great cloud.” Later he was given a second name Zenkai, which means “whole world.” In the Zen world, his preferred address is, simply “sensei” (teacher).

Matsuoka-roshi registered Taiun with the Soto Shu Shumucho in Japan July 13, 1969 (Priesthood Register No. 164, Soto Zen Headquarters, Tokyo, Japan) and ordained as a Zen Priest March 22, 1970.  He continued fulfilling his duties at CZBT until 1970, moving to Atlanta at the same time Matsuoka-roshi moved to Long Beach, leaving his senior dharma-brother, Kongo Richard Langlois-roshi in charge of CZBT.

In the early 1970’s he began offering Zen meditation and teaching, and in 1977 founded the Atlanta Soto Zen Center (ASZC) as a 501c3 NFP corporation under the charter of the State of Georgia. Matsuoka-roshi presented the title of “roshi” to Sensei, which he called “the P.H.D. of Zen,”  in an informal transmission ceremony at ASZC on September 20, 1983.

In 2012 he and senior students incorporated the Silent Thunder Order (STO), a network of priests and disciples leading the practice of 20-plus Zen centers and practice groups in the USA and Canada.

Taiun Sensei continues to offer his services as abbot (Hojo), the Founder of STO and its training center ASZC, encouraging the numerous Practice Leaders and Supporting Members to lead a Zen life, and to maintain a harmonious balance with the demands of family and livelihood. As Guiding Teacher, he oversees the training of disciples and priests, as well as ministering to the needs of a growing community (sangha) of Members and Newcomers.

ASZC has operated continuously for 40 years, and its network of affiliates in the US and Canada, organized under the STO, has prospered, owing to the sincerity of Zen practice of its Members, and the shared commitment and support of many qualified trainees and teachers who have adapted Sensei’s ordinary, everyday style of Zen practice and training for lay people.

Sensei was born on a farm outside Centralia, Illinois on March 11, 1941, into a working class family. His father was the leader of a jazz quintet as well as a welder and pipefitter, his brother a professional jazz pianist and teacher of professionals at U of I Champaign Urbana and U of Maryland. His older and younger sisters were also both creative in dance, and his mother was a creative seamstress who made dance costumes and clothing for her children. He grew up in that small town, after his family lived for a brief time in Chicago. Completing high school with honors, he then returned to Chicago, attending the Institute of Design (the “New Bauhaus”) at the Illinois Institute of Technology, receiving a B.S. In 1964, and an M.S. in 1970.  From 1966 to 1970 he taught design and art classes at the U of I, Chicago Circle Campus, and the School of the Art Institute of Chicago. He is indebted to his many mentors in both Design and Zen.