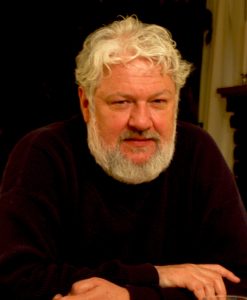 Some may wish to classify my work as belonging to one school of painting or another, such as Abstract Expressionism. But it is actually the opposite, being neither abstract nor particularly expressive, in the human sense. Here the image is the concrete result of experience in working with the medium in a way that minimizes human interference or manipulation in order to optimize the natural image.

I am gratified to be able to continue my life-long exploration of the nature of painting, and to have it accepted by the public. After all, one is not an artist merely because one declares oneself to be, anymore than one can credibly be a self-declared Zen master. It is only when others recognize one’s artistry, or mastery, that the appellation becomes appropriate, and even then the honor can be questionable. History is often a harsh judge, defining who the great artists are or were, and history can be a deceiver in that regard. Because one’s art is popular, or commands extreme prices, does not necessarily mean it is greater than art that does not. It may simply indicate that the artist in question has been promoted more, and that the art has become a commodity to be traded in an inflated market, based on motives other than simple appreciation of art.

There have been several high-profile suicides in the world of art, some intentional, others suspicious, which leads me to speculate that these great masters may have painted themselves into a corner. The worst catastrophe for an artist is to become disinterested in his or her own work. Like writer’s block, it can be devastating to reach the end of a blind alley, to run out of ideas. But in the visual arts, it may be even more disastrous, as it is always possible to produce another painting that is, to all intents and purposes, and from what can be seen, like the others. They have established and sustained fame and fortune, after all, so the temptation is there to continue, even though the heart has gone out of it. This, I think, is the danger in trying to develop a “style” by which one’s work can be recognized.

The Tao te Ching has a line that asks something like: “Which is more destructive—success or failure?” If we are immensely successful in creating and selling our art, it may have the unintended consequence of closing down our options for doing something truly creative—by definition different—from what we have been doing so far. This is a delicate balance that must be achieved in any area of life, perhaps revealed most clearly in the arts.

The idea of mastery can be similarly misconstrued, as can style, or the ultimate meaning of art. Master is often regarded as the imposition of the will, to forcefully bring order out of chaos. But we do not master Zen; it masters us. Similarly, we do not master the medium of choice in art; we must perforce come into harmony with its nature. From the ancient Chinese Zen poem Harmony of Sameness and Difference:

The four elements return to their natures just as a child turns to it mother: fire heats; wind moves; water wets; earth is solid.

Space and consciousness are often added to round out the half-dozen fundamental elements. These four great elements are at play in my works, as indeed they are in all existing phenomena, whether of artificial or natural provenance. As this is so, it is the challenge of the artist to come into harmony with the elements of nature, as well as chemistry, gravity, et cetera, to reach the limits of the possible within the confines of the canvas and the medium. In doing so, I take great delight in witnessing the expression of these forces, dancing in the microcosm of the image surface.

Thus it is not a false humility for me to say that I do not consider myself to be the sole creator of these works. Nor am I claiming the imprimatur of a “creator” operating behind the scenes, though I often joke that I have the greatest painter in the world working for me. Showing my process to a neighbor, an orthodox Rabbi, he exclaimed, “Oh—you let God paint for you!” I would not say it that way, but the difference may be at heart a matter of semantics.

Any creative endeavor does not truly create anything new, but merely rearranges that which already exists. Art is largely the product of natural processes beyond our control, but it does not become art without our controlling our own participation in the process. Once the causes and conditions influencing the image have been established, they more or less paint themselves. But they need constant attention as they evolve, like cooking a souffle. Overworking and inattention can both lead to an unsatisfactory outcome.

Like many contemporary artists, as well as jazz musicians, my goal is to get myself out of the way, minimizing any obvious effects of intention, so that the image may magically seem to appear of itself. The overall process amounts to a kind of alchemy—turning the dross of pigment into the gold of the image. As Claes Oldenburg mentioned in a 1960s seminar I attended as an undergrad, paraphrasing—to create the beautiful, the artist naturally turns to the ugly. The finest paint pigment is nothing more than refined mud, after all.

Zen ideals of Samadhi—harmony and balance in action—manifest when one can fully surrender to the medium, paying undivided attention as to what IT is trying to do. The result is no mere accident—except in the sense of Ambrose Bierce’s definition from The Devil’s Dictionary: “An inevitable occurrence due to the action of immutable natural laws.” When I manage to not interfere too much or too little, a genuine masterpiece occurs, much like any stain, spill, splotch, mold or spot, which I personally find beautiful. I hope the display of this work as art may turn the attention of the viewer to the beauty that is all around, in every corner of this world we inhabit.

In the plastic arts, we work with a variety of physical media to produce images of beauty. In the performing arts, the body itself, as in dance, the voice as in singing, becomes the medium. In Zen, we explore the most intimate and fundamental medium of all, that of consciousness itself. And similarly to the others, the main challenge is to surrender to the medium, rather than attempting to force it to our will.

The plastic, literary and performing arts have greatly benefitted from their association with Zen, in the East as well as in the West. Zen is becoming mainstream in the new and emerging American culture, but its effect on the arts is perhaps not as obvious today as in periods of the past. I hope to make this symbiosis more evident, to the delight of all.