Please examine my conceptual model illustrating four concentric spheres framing the comprehensive context of our Zen practice. We approach them from the inside out, so to speak — beginning with the Personal, then its interface with the Social, the Natural, and the Universal, outer spheres of our surrounding reality (note the outward pointing arrow in the External illustration below). 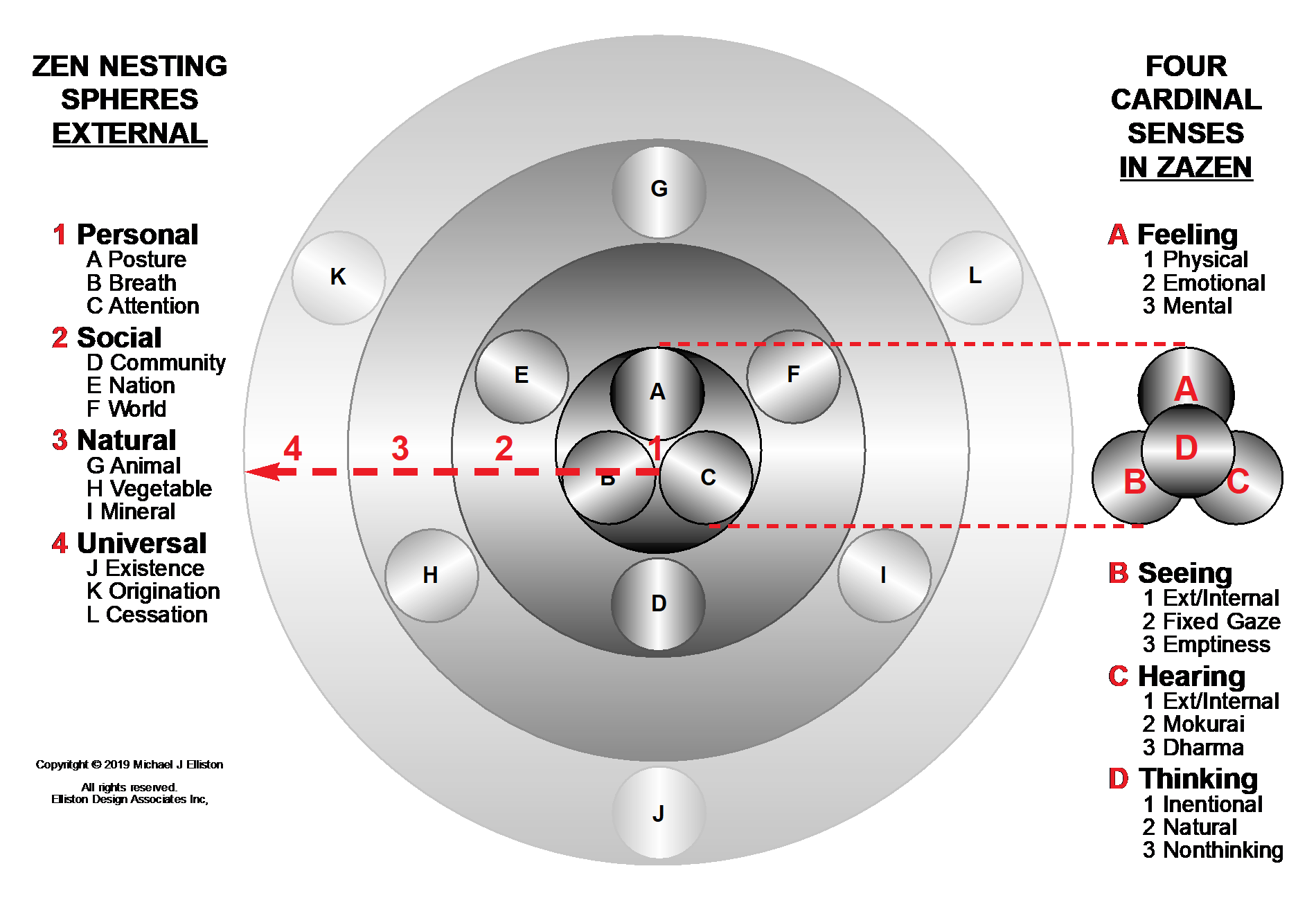 Whether we are looking at it from the outside or from the inside, our basic approach to the method of zazen does not change. But the implications of Zen practice take on a different light. Going from inward to the outward dimensions, we encounter the interface boundaries on an increasingly global scale, from social relationships with family and friends to the larger community of the nation and the world. Inevitably we encounter unpleasant aspects of living in the world, including conflicts in family, livelihood, and the political arena. These also have a halo effect on our relationship to the natural world, including difficult issues with balancing our material consumption with genuine compassion, particularly as regards human management or mismanagement of the resources of the three kingdoms — animal, vegetable, and mineral. These, in turn, engender problems in the realm of social justice and world peace.

HOW IT IS; HOW IT CAME TO BE; WHAT TO DO ABOUT IT; CONSEQUENCES

Buddha’s teachings include descriptions of reality — how it is, like it or not — including the first Noble Truth of existence of suffering, and the Five Aggregates. Others, such as the origin of suffering, craving or thirst, clarify how things come to be the way they are, culminating in the Twelvefold Chain of Interdependent Origination (my model features thirteen links rather than twelve. I have included “perception” to complete the Skandhas, not called out separately in the original). 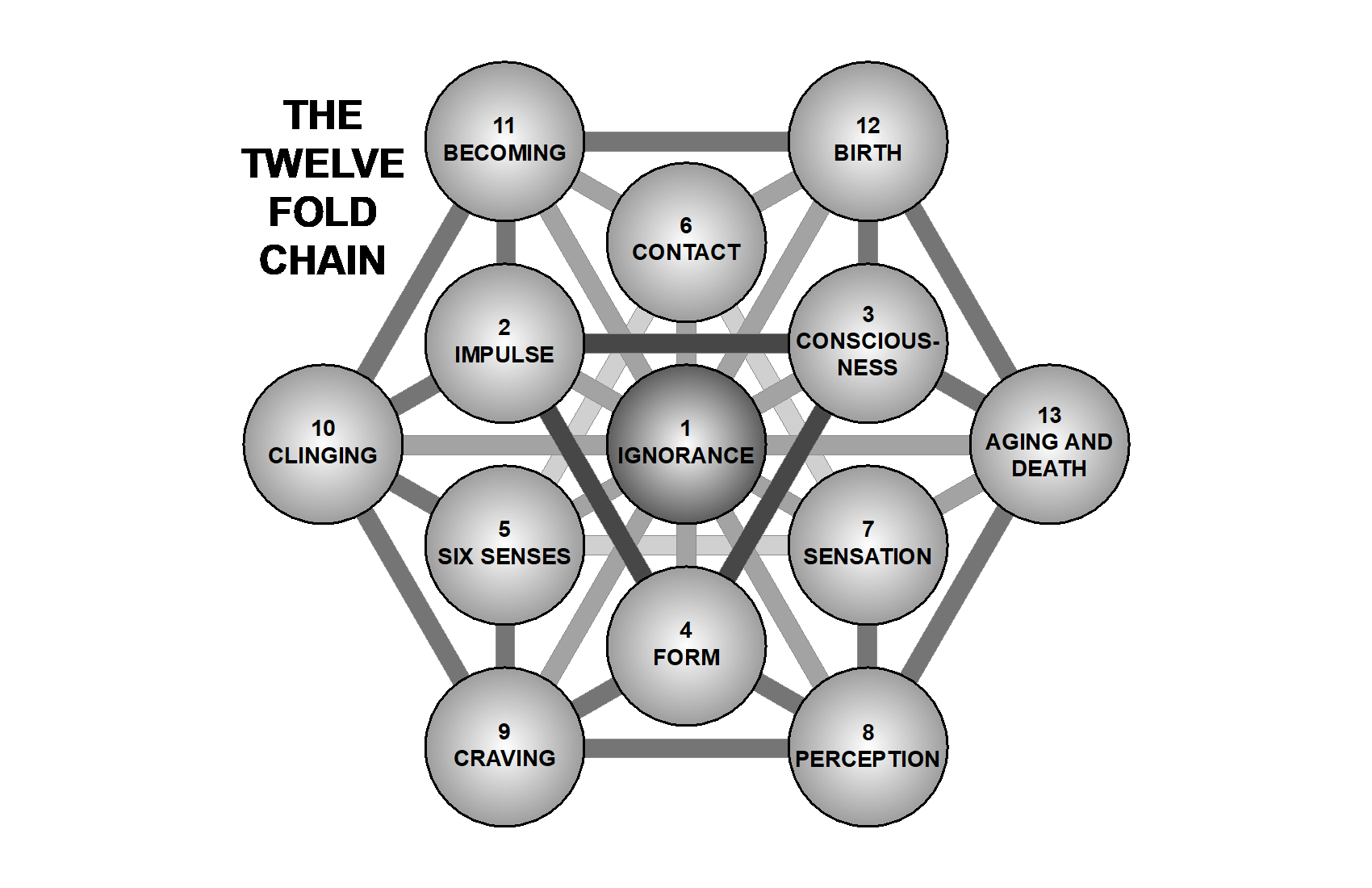 The cessation of suffering, the Eightfold Path and the Paramitas, amount to prescriptions for what to do about it, how to practice right conduct and discipline, generosity, patience, and all the rest. This includes the admonitions to “fully understand” the existence of suffering, to “abandon” craving, to “realize” cessation, and to “follow” the Path.

The results of following the buddha way, the development of right wisdom and compassion, amount to implicit and explicit promises of the positive benefits of living a Zen life. On the other hand, the downside of not practicing — negative karmic consequences — may ensue. The original, self-inflicted carrot and stick.

Our interactions with the contextual spheres of practice illustrate the principle of the interdependency of all things, emphasizing proximate causes and conditions over spooky-action-at-a-distance, magical thinking, or so-called butterfly effect.

For example, we are dependent upon our social connections to parents, family and friends for our development into fully functioning, independent adults. But if we become overly dependent, or co-dependent, it can have deleterious effects, examples being “smother love” and neurotic, destructive relationships. If on the other hand we try to be too independent, or conceive ourselves of such, it can lead to the mythos of the “self-made man” and other such conceits. When we come to see our existence as inextricably and intimately interwoven with that of others, we can hope to maintain a proper balance in all such relationships. This cuts both ways, in that others may develop an imbalance in their relationship to ourselves, regardless of how we see it or feel about it. Misunderstandings abound in the social dimension. Each of the contextual spheres has this aspect.

In confronting the natural world, if we are not in harmony with how it functions, we may do irreparable harm to the ecological system on which we depend for out sustenance. On the other hand, we may find ourselves in danger of personal injury, e.g. by underestimating gravity; or our body’s ability to withstand exposure to the elements; or risk poisoning from tainted liquids or foods, e.g. mushrooms.

In the context of the universal sphere, we find that we have even less discretion than we do in the context of nature. Earthquake, flooding and climatological forces we would have to place at the boundary of the natural and universal. These geological events, such as the eruption of volcanoes, which recently killed several people who were exploring an active one while on vacation, are examples of catastrophic collision of the personal-social and the natural-universal. It is clear that the so-called natural world, especially at the edge of the universal, is no respecter of persons. We are of it, but it does not depend upon us or our survival.

All four spheres are interdependently evolving, with emphasis on ever greater independence as we move from the personal to the universal. That is, the effects of personal dependency are increasingly lopsided: the volcano can destroy us but we cannot harm it. If we kill off living species, the effect boomerangs on us.

RATS IN A MAZE

Even the realm of the social cannot be considered a respecter of persons. This unfortunate truth is what we witness in the majority of news reporting. In the fields of physics and mathematics it is said that the simplest, most elegant solution is most likely to be the correct one. In the messier realm of social and political relations, the same principle may apply. It has been demonstrated that if you continue to pack more and more rats into the same maze, at a turning point of extreme overcrowding, they begin to turn on each other, violently. They blame each other, as they are oblivious to the true source of their discomfort.

It may be that overpopulation of the human race on the planet, now at some seven and a half billion and counting, may be the simplest explanation for why people continue to turn on each other in the post-Enlightenment age. Like rats in a finite maze, there may simply be too many people competing for the same resources. Resources that are increasingly threatened by predations of unpredictable weather patterns resulting from climate change, with resultant drought and forest fires, alternating with storms and flooding, all also at least partly a result of accelerating growth in population.

If this is an accurate assessment of the situation, it is understandable that in one sense no one person or group can be held totally accountable for the crisis, and it follows that each would tend to blame the other, like rats. Divisiveness and tribalism afflicting today’s public discourse can be seen as a natural reaction to increasing pressure just to survive, or to sustain our preferred and accustomed lifestyle. Even the wealthy should recognize that they cannot buy their way out of the current dilemmas facing society. It is the Tragedy of the Commons writ large.

In Zen, we recognize that any solution to such social problems begins at home. We confront these issues from the personal standpoint, beginning with meditation. This is the personal sphere in which we work out our own resolution of our own unique, individual case. From there, we can then work our way out, to the outer spheres in the model. Zen suggests a bottom-up, not a top-down, solution.

Our personal practice of Zen meditation is influenced by, and conversely influences, our social, natural and universal spheres of experience. How that works, and how thoroughly you grasp its impact and implications is up to you.

Next month we will continue with a closer look at the inner sphere of the Personal, where we will find that the Social, Natural, and Universal are reflected on a smaller scale.