RETURNING TO NATURE IN ZEN

We have themed our Spring and Fall retreats at Watershed simply as a “Return to Nature.” This, after attempting other approaches such as workshops and specific dharma focus. But the natural environment of Watershed is so rich that any such  additional content seems superfluous. After all, Zen has a history of emphasizing the natural over the artificial. And there is nothing more natural than Nature.

However, Zen has also insisted that the works of man, and indeed the very presence of humankind in Nature is also natural. Master Dogen’s reference to “walls” in “Self-Fulfilling Samadhi (Jijuyu Zammai)” emphasizes this point:

So while Nature is continually expounding the dharma, and that dharma is what we go to listen to at Watershed, the walls of the zendo — there as well as those at Zonolite — “bring forth” the teaching. There is no dichotomy in Zen, only in our minds.

But returning to nature has another implicit meaning, which is returning to our Original Nature, or buddha-nature. So you might say that we return to Nature in order to give our mind a break from the environment of the city, with its hectic pace and compounded distractions. In doing so, recovering buddha mind may be easier.

We may want to consider what it means to be “natural,” all snide comments about “Mr. Natural” aside. From a Zen perspective, it is natural to be quiet, “the gift to be simple,” and normal to be contemplative. It is also natural to question our own reality, along with our personal opinions and beliefs about it.

When we look at the culture of America (and around the world) today, however, we see that much of the behavior of our fellow citizens, and particularly our leaders, does not conform to this kind of nature. If you have ever witnessed a flock of birds, or a forest canopy full of monkeys, you may remember that they may be peaceful and quiet, but when a threat appears, in the form of a predator, all hell breaks loose. The birds flee as one in one fell swoop, shrieking as they go, and the monkeys explode into a frenzy of chatter and calls, while scrambling for cover.

Similarly, we may interpret the hyper-activity and over-the-top volume and hysteria of our public discourse to be the symptoms of feeling under threat. As I am writing this, a pedestrian walked by wearing a teeshirt with the message, “Keep calm and party.” Much of the popularity of meditation today is likely a reaction to the ever-increasing anxiety level of living in a society whose institutions, such as the political establishment and news media, seem more and more to thrive on conflict, whether real or manufactured. So it is natural to want to escape to a party, or more quiet climes. And to seek refuge in the compassionate teachings of Buddhism.

As a designer by profession, one of the memes and methods I have adopted is to visualize information that may otherwise remain invisible, particularly in the graphic design media. Those familiar with my “semantic modeling” of the teachings of Mahayana Buddhism have seen examples of this, as in the “Internet of Dharma” poster below. (If you would like a poster-size print, please contact or visit ASZC.)

This kind of treatment of Zen’s foundational teachings creates a mnemonic to remember them by, much as the original teachings in India were enumerated. When available only in oral tradition form, i.e. as live chanting rather than written down, the six of this, eight of that, twelvefold chain, etc. serve as prods to memorization. 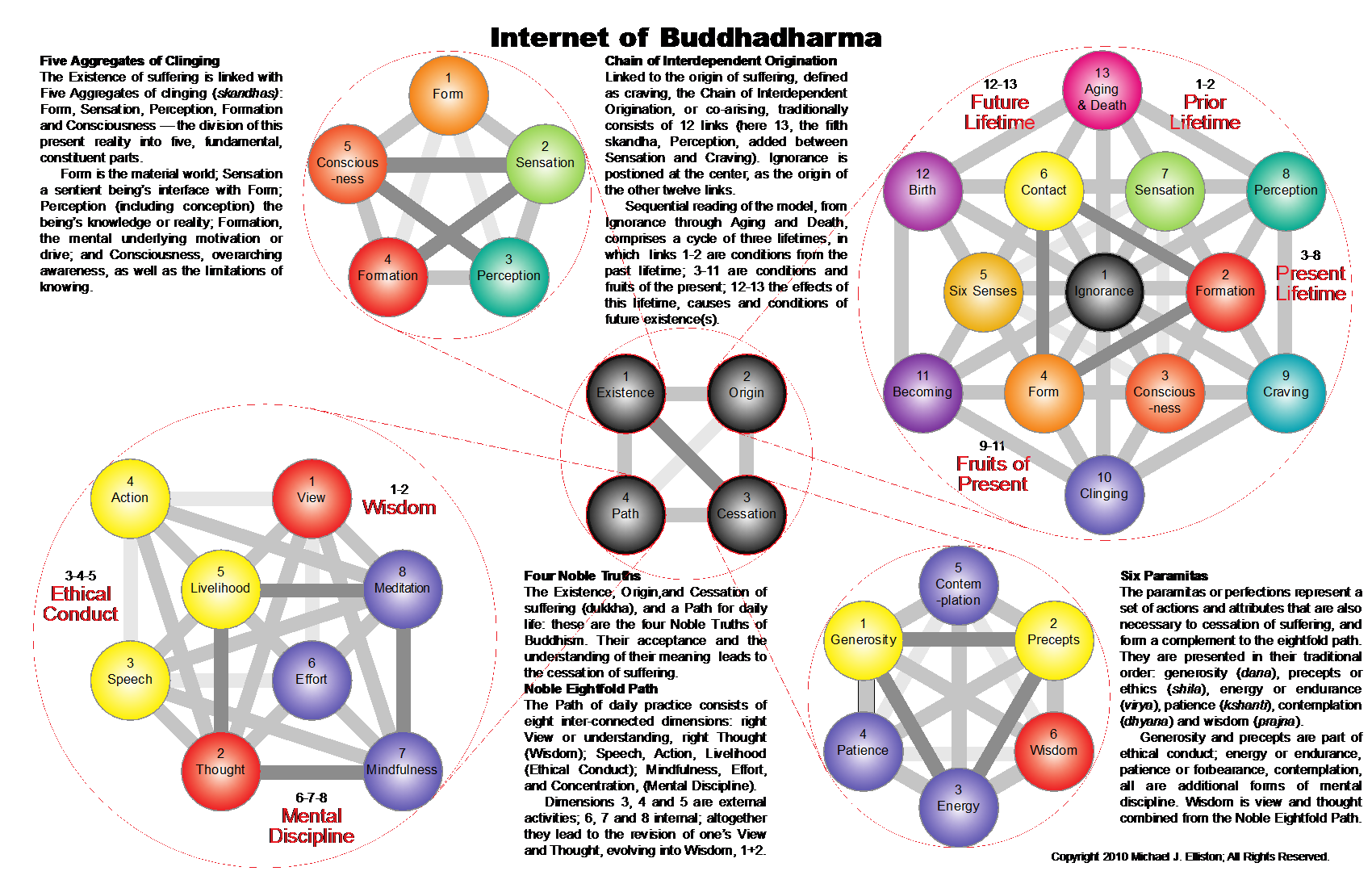 There are many examples of such “models” of Zen and Buddhist teachings in history, meant to act as aids to a Master’s students, in grasping the teachings as a whole, rather than as disparate, disconnected parts. But these constructions were never intended as anything more than guides. The map is not the territory, as we say today. Another salient quote from Dongshan’s “Precious Mirror Samadhi (Hokyo Zammai):

If you want to follow in the ancient tracks

Please observe the sages of the past

One on the verge of realizing the buddha way

Contemplated a tree for ten kalpas

But the admonition was not only to imitate the great masters of the past in terms of meditation, though that is the central method in Zen, but to listen to what they had to say about the dharma as well. The value of tracing the teaching was not underestimated, as may be seen in the Ch’an poem “Trust in Mind (Hsinhsinming)” by the third Patriarch in China, Sengcan:

To move in the One Way

do not reject even the world of senses and ideas

Indeed accepting them fully is identical with true Enlightenment…

Penetrate the Source and travel the pathways

Embrace the territory and treasure the roads

My interpretation of this is that Zen is far from anti-intellectual. It just places the intellect in its proper context of experience and intuition, the empirical method, if you will. Sensory learning, and unlearning, are as important as the world of ideas.

The teachings, the method, and the effect of Zen practice, following the buddha Way, are all intricately interconnected, to use one of Matsuoka Roshi’s frequent expressions.

Enlightenment here is not a goal of Zen, as conventionally (mis)understood, but the condition of pursuing the dharma. Penetrating the source may be the ultimate objective, but it cannot be done by other than traveling the pathways trail-blazed by our ancestors, embracing the same territory they explored, and treasuring the roads they paved for us. While awakening spiritually may be a natural consequence of being alive, it is not to be taken for granted, as our innate birthright. We have to do the work.

A vision of the overview that Zen Buddhism points to arose in my mind’s eye during this retreat, as I was tasked with leading a dialog each day, for the benefit of the others in attendance. So I had to say something. It occurred to me that we may sort the various dimensions of Zen practice into at least four: the Personal; the Social; the Natural; and the Universal. A simple model of these spheres is best illustrated as concentric circles: 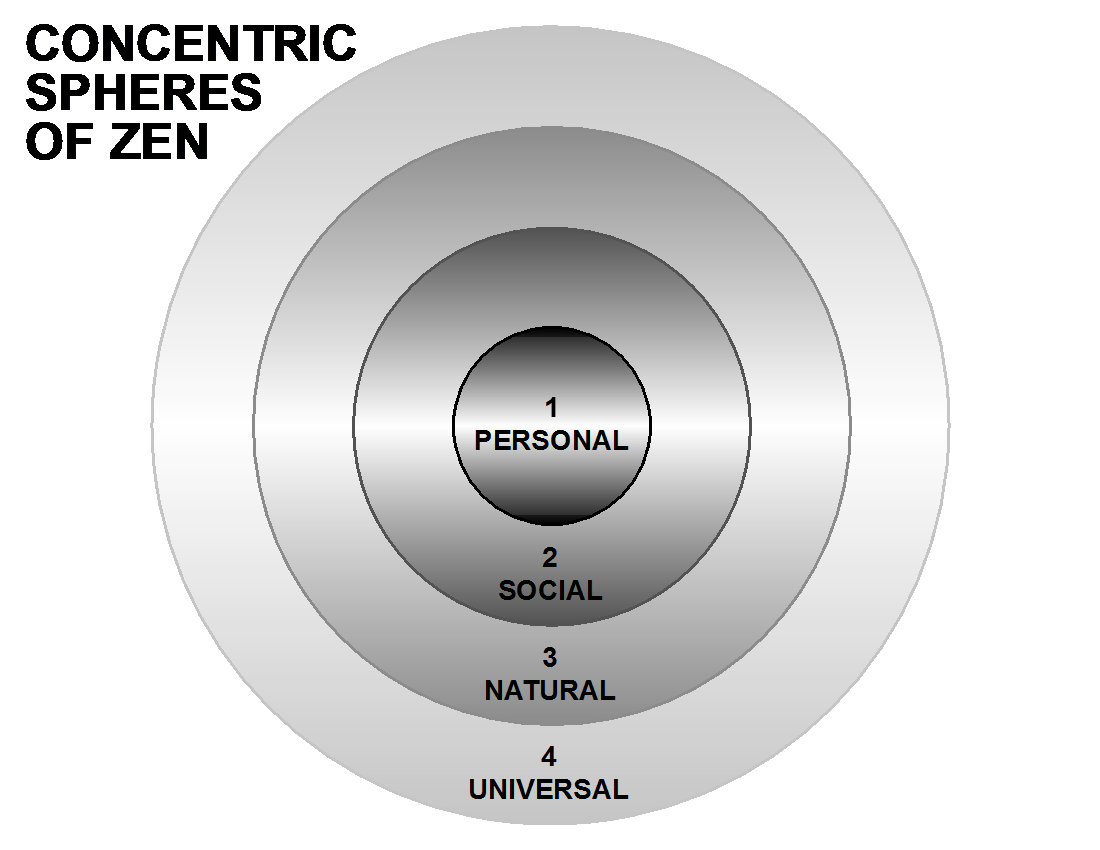 At the center, quite naturally, is our personal practice of Zen meditation — zazen. It consists of finding and following the natural posture of the body, to be able to sit still for relatively long periods of time, in relative comfort. Our tribal ancestors used to sit around the campfire this way, or when hunting, in even greater stillness, so as not to spook the prey. We follow the wisdom of the body in recovering the original sitting posture that is native to maintaining alertness and balance. It is the most efficient, the least consumptive of energy, of the four cardinal postures.

Likewise the breath we are looking for is the natural, deep breathing that is the way the body replenishes its energy. We get far more energy from breathing than from eating. The breath tends to slow down, compared to our usual hyperventilation; and penetrates deep into the bottom of the lungs, in contrast to our usual palpitations.

As the body naturally becomes more still, the breath settles down as well. We experience longer periods of siting without breathing, when the lungs are empty at the end of an exhalation. This is very calming to the nervous system.

As the body and breath come together in a more natural, unified way, it is also a natural result that our attention settles into the present moment, rather than wandering far afield in speculation, worry, or rumination over the past. When we become overly distracted by such mental machinations (“monkey mind”), we simply return our attention to the breath and posture. This in turn reminds us that the present moment, with its rich landscape of sensory impressions, is the starting point for our practice of paying “Attention; Attention; Attention!” as one old Master defined the secret, and method, of Zen.

Thus we move into the Social dimension of Zen practice, which will be the starting point of next month’s Dharma Byte. Meanwhile, don’t give up on your Zen practice.